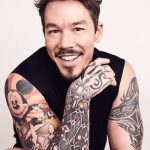 David Reed Bromstad (born August 17, 1973) is an American designer and television personality. He became the winner of the debut season of HGTV Design Star in 2006. He also hosted his own television show called "Color Splash with David Bromstad" which debuted in March 2007 on HGTV. He also hosts … END_OF_DOCUMENT_TOKEN_TO_BE_REPLACED