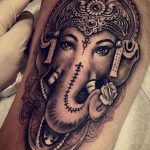 Ganesha (Ganesh) is very popular and most worshiped God in Hindu religion. He is the Hindu god with a head of an elephant and pot belied human body. Not only in the east, Ganesha tattoo is also very popular in the west for its spiritual significance. Ganesha tattoo represents spirituality, religion … END_OF_DOCUMENT_TOKEN_TO_BE_REPLACED 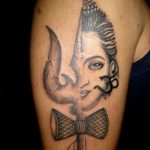 Tattoo Designs of Hindu Gods, Goddess, Deities and Avatars such as Shiva, Ganesha, Kali and Hanuman are very popular in Western culture. Hindu religion is considered the “Oldest living religion” in the world. According to the Hindu scriptures there were 33 million Gods. Shiva/Shiv Shiva is the god … END_OF_DOCUMENT_TOKEN_TO_BE_REPLACED