Originating in Asian cultures, the yin yang symbol and the yin yang tattoos represent stability and balance in life. The concept of Yin & Yang lies at the basis of Taoist philosophy. It makes many appearances in popular and consumer culture, representing things like balance and inner peace. But the profundity of yin and yang goes way beyond that.

The idea behind yin and yang is kind of paradoxical.

The black and white in the yin yang symbol stand for two opposing forces that are also complementary. This constant mutual attraction and repulsion cause a continual change that manifests in what we call the universe. Phenomena like life and death, winter and summer, matter, and emptiness are all physical manifestations of yin and yang.

Ideas for Yin Yang tattoos are plentiful and splendid. You can go with the traditional black and white circle with the corresponding dots. By the way, Yin Yang tattoos and the symbol are always created in a circular pattern, representing the never-ending nature of duality and life.

You can use any items to create Yin Yang tattoos. Two koi fish tattoos are popular, using one light and one dark fish circling each other.

Again, the sun and moon are representations of the male and female aspects and inked as Yin Yang tattoos look spectacular. You can accomplish this by using a half-moon and half sun. The conflict here is that the coloring is challenging to manage. Remember that the dark side of Yin Yang is female, and the moon also represents female. You will need to talk with your tattoo artist about your concept in shading the moon half so that it appears darker than the bright sun half, which will need to appear “lighter”.

Celtic Yin Yang tattoos work well too. Create a circle of Celtic twists or knots. Lace one half and not the other maintaining the traditional teardrop shape of the Yin Yang symbol.

Yin Yang tattoos do not have to be black and white, as in the koi fish mentioned above. Pick any creature of your choice, say dragons, and wrap them around each other, keeping one dark color and the other lighter, again in a circular pattern.

Coloring of Yin Yang tattoos is really up to you unless you are a traditionalist; then stick with black and white. Use your imagination when it comes to the different items you could wrap around each other; like people, for instance, the female would be darker than the male.

Placement of Yin Yang tattoos can go just about anywhere because of their size. Of course, it depends on whether or not you choose to use unusual items to create the circle of duality, in which case it will require more skin for detail.

Because the meaning of this symbol is so versatile, it is a trendy option for tattoos. Below are some great examples.

This yin yang tattoo is used as the background for a green character, giving the impression that the person is one with nature. 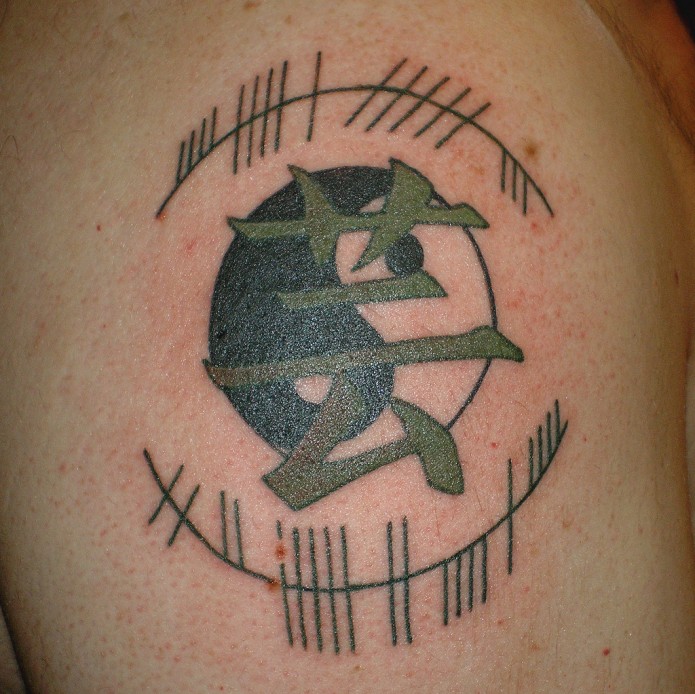 This yin yang appears to have wings, making for a perfect lower back tattoo. 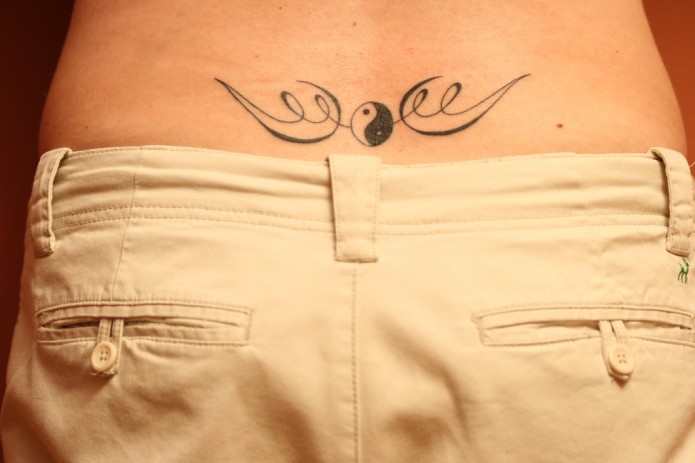 This tattoo incorporates the yin yang symbol into a base cleft, combining the idea of duality with a love of music. 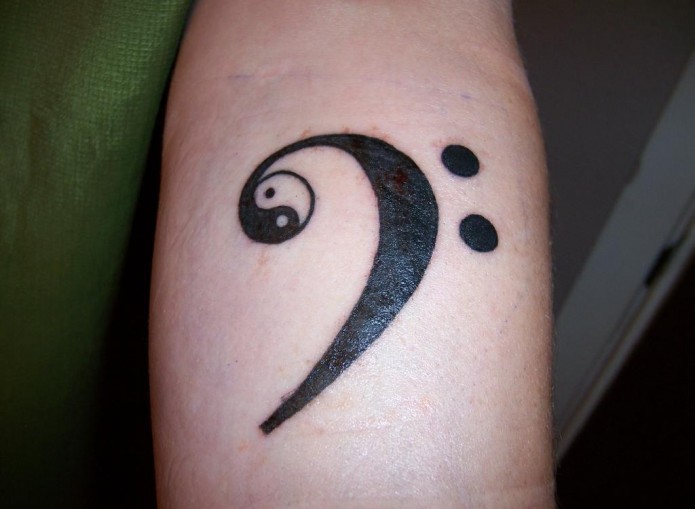 In this tattoo, the yin yang symbol serves as the center of balance for all of the elements. 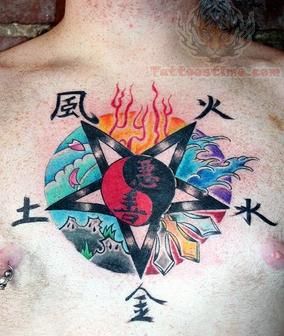 An orange and pink flower background makes this black and white yin yang tattoo stand out. 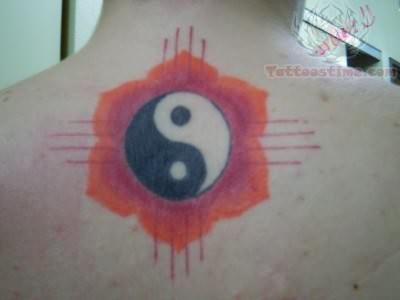 Instead of the traditional black and white yin yang, this tattoo incorporates different colors to bring these creatures to life. 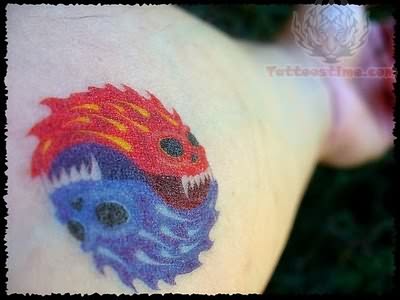 A tiger and a dragon perch on either side of this yin yang tattoo, making for a beautiful and intricate work of art. 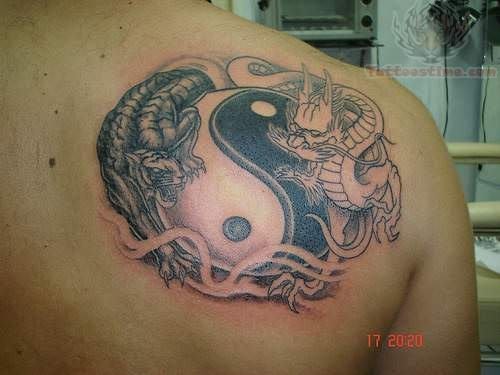 By replacing a dot with a maple leaf, this yin yang tattoo becomes a symbol of Canadian pride. 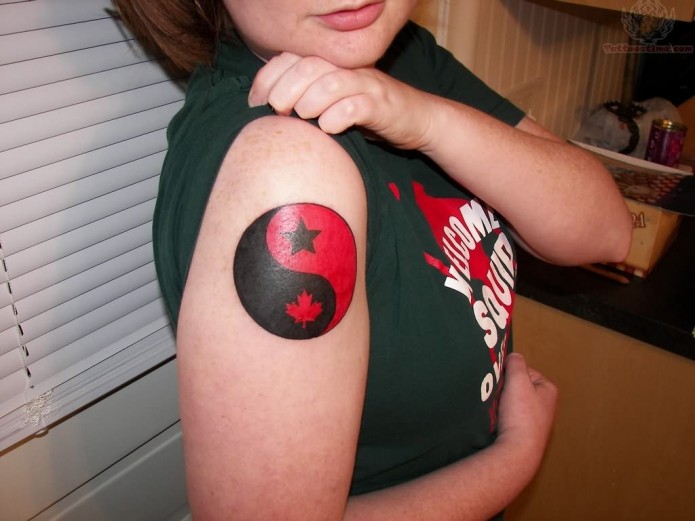 By adding a small swirl to each half of the symbol, this tattoo puts a slight spin on a traditional symbol. 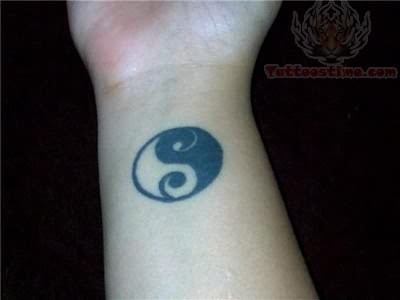 In this unique tattoo, a dragon appears to crawl out of the yin yang to prepare for battle with its opposing force. 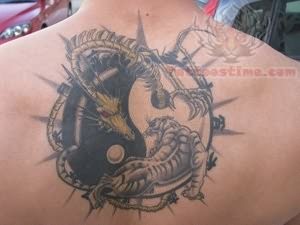 A simple dragon wraps its body around the delicately shaded yin yang. 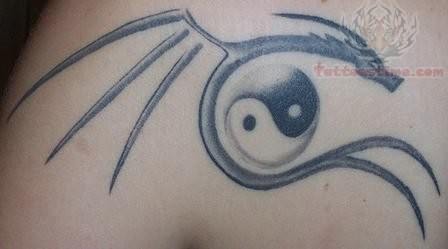 Paw prints can be seen in both halves of this symbol, perhaps indicating a love for animals. 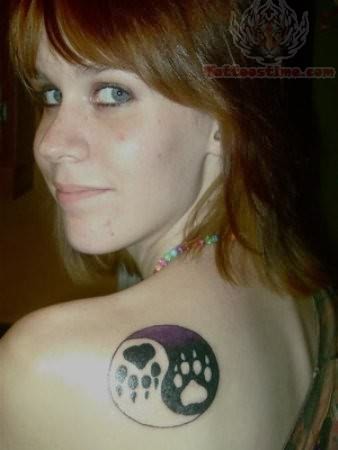 A tribal pattern adds something extra to this yin yang symbol. 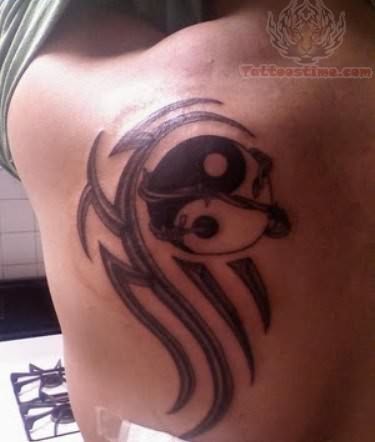 This yin yang tattoo takes two opposing forces and combines them as one. 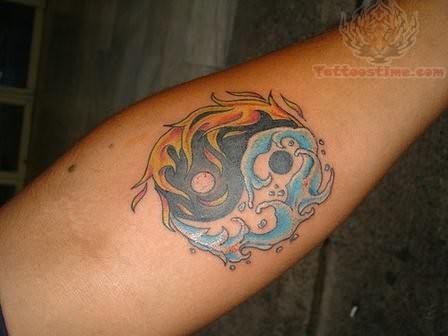 These dolphins contribute to the sense of peace and harmony on this yin yang tattoo. 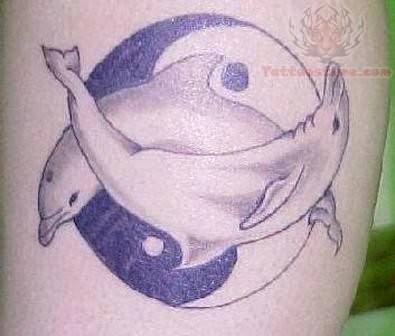