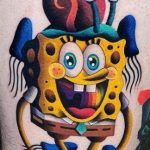 SpongeBob Tattoos are popular among people who grew up in the late 90s and early 20s. When it comes to Nickelodeon, there was always one cartoon that reigned supreme. SpongeBob SquarePants was Nickelodeon's ace-in-the-hole. For us 90's kid imposters, SpongeBob was inescapable. If we weren't … END_OF_DOCUMENT_TOKEN_TO_BE_REPLACED