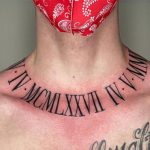 The Roman Numeral Tattoos have risen in popularity over the past few years. Not only do they create interest in the wearer and the meaning of the numbers written on the body of the wearer, but they also give the rest of us a reason to learn Roman Numerals in Math class. They lend themselves to be … END_OF_DOCUMENT_TOKEN_TO_BE_REPLACED