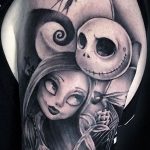 Do you believe in True love? Do you believe in love at first sight? Then you will love Jack and Sally Tattoos. Jack and Sally are the two famous characters from Tim Buton’s stop-motion animated, musical, fantasy movie called “The Nightmare Before Christmas.” The film was released in 1993. Jack … END_OF_DOCUMENT_TOKEN_TO_BE_REPLACED