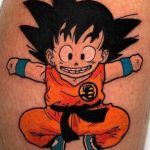 Goku Tattoos are very popular among Dragon Ball Z fans. Let's face it. Dragon Ball has been an iconic franchise in pop culture worldwide ever since its first manga iteration came out on November 20th, 1984. It's adored around the world as an anime with one of the most loyal fan bases ever to … END_OF_DOCUMENT_TOKEN_TO_BE_REPLACED